Ban of Russia from Swift – what are the risks for the banking system? 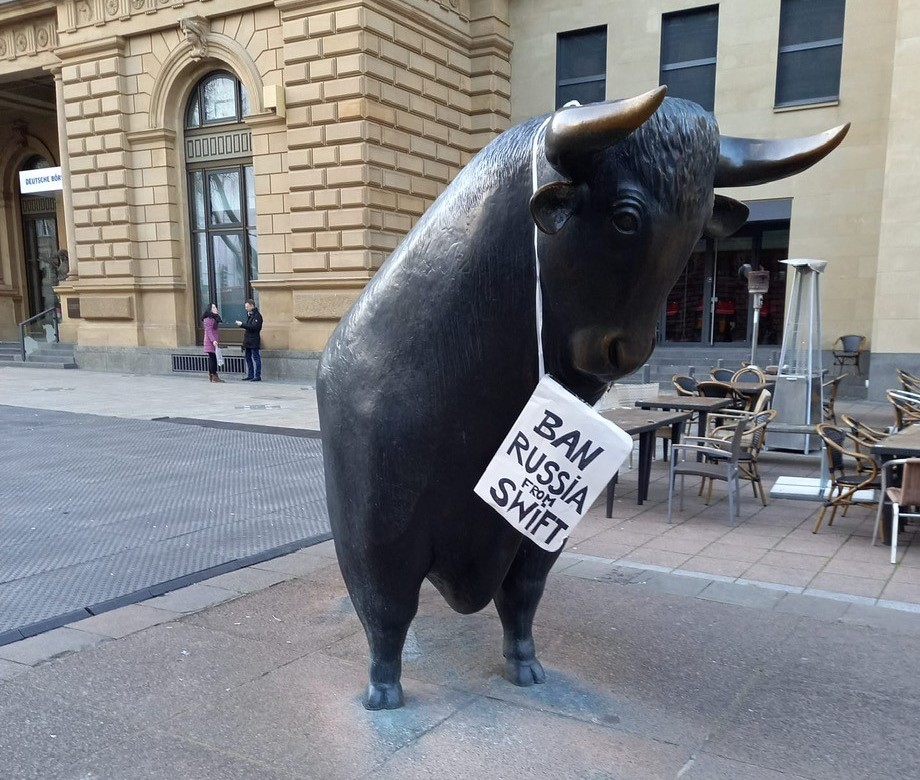 Following the decision to exclude Russian banks from the international payment system Swift as part of the sanctions against Russia to defend democratic values, we aim to shed some light on the imminent risks for the banking system.

On Saturday, the United States and European nations agreed to ban selected Russian banks from Swift, as an appropriate response to the intensification of the Ukraine invasion. The objective of this move is to isolate Russia from the international financial system. While a powerful measure against Moscow which hampers the country’s trade with key natural resources like oil and gas, it could also backfire on western banks and provide a threat for global financial stability.

As of today, it is not yet known which Russian banks will be banned from Swift. Even if the ban affects only a few selected institutions, there are a the following risks:

With the ban from Swift, Russian banks and their western subsidiaries lose access to liquidity and the capital market. This makes it difficult for them to fulfill their commitments. According to yesterday’s assessment of the European Central Bank (ECB), Sberbank Europe AG and two of its subsidiaries in the banking union are “failing or likely to fail”. The institutions face significant deposit outflows which they are unable to meet. It appears not unlikely that other Russian banking entities in western countries will struggle similarly.

Further, it is expected that a number of Russian commercial firms in the energy market will not be able to make their payments due to western banks and their commercial trade counterparties. The delay of payments from Russian firms will cause uncertainty and may disrupt energy markets. This falls together with an increased risk of sanction driven defaults of Russian firms.

To execute international payments, banks maintain a network of correspondent banks. Swift is the communication network which facilitates the efficient handling of such payments. Western banks which execute their payments in RUB through a Russian correspondent bank affected by the Swift ban may face severe difficulties in executing their own payments. For instance, if a Swiss bank engaged in a RUB/USD spot transaction with a U.S. bank on Friday, the settlement due this week may become a challenge. If the buyer, the seller or even both banks execute their RUB cash payments through a banned Russian correspondent bank, the settlement of the transaction may fail. This means that the bank who sold RUB against USD does not receive the USD payment. This creates an issue if the cash inflow is needed by the bank to satisfy a USD commitment. As a consequence, liquidity could run short in several currencies and central banks may be forced to step in.

3. Loss of funding for subsidiaries

Constrained payment possibilities may hinder subsidiaries of western banks in Russia to execute payments and to receive group internal funding. The cut off from foreign liquidity supply may cause local liquidity shortages and could even result in a technical default and loss of confidence if these entities become unable to fulfill their commitments to local customers.

The sanctions imposed against a few politically exposed persons include the freezing of their assets and may prevent banks from executing security transactions for them. An extension of this sanction to other uberwealthy Russian oligarchs can create an issue if a bank who provided such a client leverage is restricted from selling collateral. If a bank cannot react to a decline in stock market prices by liquidating the collateral, it could end with an insufficiently secured loan exposure. How loans already provided to clients potentially subject to sanctions should be handled is therefore a crucial question before sanctions are expanded to a broader group of influential Russians.

In sum, the abrupt ban of Russian banks from Swift may cause a significant amount of uncertainty in the global financial system. Even if the sanctions are limited to few banks, it can trigger a dangerous series of bank failures around the globe. It is therefore important that central banks stand by to support the market with the necessary liquidity if needed, albeit it may create a temporary contradiction with their mandate to fight inflation.

The sad and largely unforeseeable invasion of Ukraine emphasizes the need for banks to establish a crisis-proof legal entity structure. Orbit36 has the competence and experience to design and implement a treasury model which remain effective even under difficult market conditions. Please contact us if you want to discuss further.