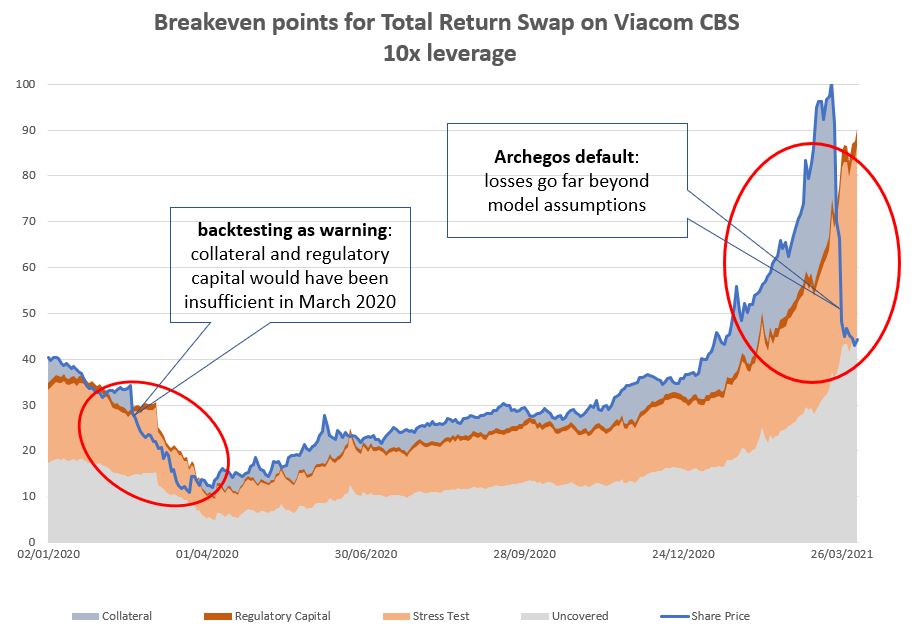 The large losses of some banks in their derivatives transactions with hedge fund Archegos indicate serious shortcomings in regulatory capital regulation and stress testing methods for collateralized OTC derivatives according to Orbit36 analyses.

Archegos has built up highly leveraged equity exposures through Total Return Swaps (TRS). As illustrated in Figure 1, the banks bought and financed the underlying shares, held them on their own balance sheet and passed the P&L via the TRS to Archegos. Typically, banks require clients to post collateral in the amount of 10%-20% of the deal size as margin. This allows hedge funds to leverage their exposures between 5-10 times.

Bilateral margining agreements can provide both parties in a derivatives transaction safety, especially if daily re-margining is applied. If one party does not meet its contractual obligation, the other party can through the liquidation of the collateral mitigate the loss from the default of the counterparty.

As explained in Figure 2, the bank does not incur a loss from the default of its counterparty if the value of the collateral is higher than the value of the TRS. It is, however, crucial that the bank can unwind the hedge position in the underlying shares quickly. If the share price falls during the liquidation process below the level for which the exposure is covered by collateral, the bank incurs a loss which needs to be absorbed by its capital.

As shown in Figure 3, a margin requirement of 10% – which equals to 10x leverage – is not always sufficient to cover the loss that the bank incurs if the client defaults so that the TRS and the related hedge positions need to be unwound. The regulatory capital is in such situations often also not large enough to fully absorb the loss. For example, in the critical days after Archegos’ default on March 25th, 2021, the share price of Viacom CBS dropped so quickly that the value of the collateral was not sufficient to compensate the banks for the losses they incurred from the unwinding of their hedge positions in the shares. In fact, the losses even significantly exceeded the regulatory capital underpinning the transactions (RWA and LRD calculation based on new Standardized Approach for Credit Counterparty Risk, SA-CCR, CET1 requirements under Swiss Too-Big-To-Fail regulation). The banks had therefore to rely on additional capital buffers to absorb the losses. Notably, a similar situation would already have occurred at the beginning of the COVID-19 pandemic in March 2020.

As opposed to regulatory capital requirements based on RWA and LRD (Pillar 1 of Basel III capital adequacy framework), stress testing methodologies (Pillar 2 of Basel III capital adequacy framework) would generally have been able to reveal the significant additional capital need for the highly leveraged TRS transactions with Archegos, albeit heavily depending on the specific scenarios and methodologies used by the banks or prescribed by their regulators. For example, the EBA EU-wide stress testing methodology which we used to calculate the stress capital buffer in Figure 3 would likely have appropriately captured the risk. It is, yet, unclear whether this was also the case for the stress testing approaches used in other jurisdictions. For instance, Switzerland and Japan do not have similarly prescribed and transparent stress testing approaches implemented as the EU and the US. The magnitude of the losses incurred by some banks in the former countries indicates that possibly the stress testing methodologies in these jurisdictions only insufficiently captured the loss potential of the trades with Archegos.

The main conclusions are as follows:

Orbit36 has the expertise to help banks and regulators to review and enhance their capital- and stress testing methodologies.