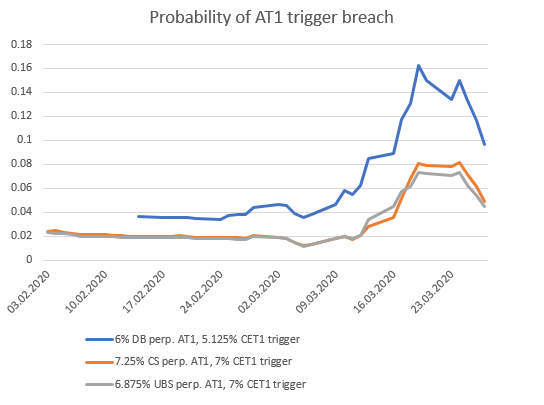 Additional Tier 1 (AT1) bonds play an important role in the capital structure of large European banks. In the following, I will discuss how these instruments have proved to be successful during the COVID-19 crisis and what information can be inferred from their prices on the likelihood of a severe banking crisis.

AT1 bonds issued by banks are not designed in a uniform way. It is therefore important to consider differences in their payout scheme. For instance, some instruments forfeit if the CET1 ratio of a bank falls below a certain threshold (trigger level), while other instruments convert into shares. In order to qualify as regulatory capital, AT1 bonds need to be perpetual. In the UK and Switzerland, the trigger level has to be set at a CET1 ratio of 7%, while in the European Union a CET1 ratio of 5.125% is prescribed as trigger level.

The AT1 bonds issued by UBS, Credit Suisse and Deutsche Bank have in common that they are written down if the CET1 ratio falls below the trigger level of 7% and 5.125%, respectively. This is convenient, as it allows to infer the probability of a trigger breach relatively easily and with less uncertainty than for other AT1 instruments.

With the worsening of the COVID-19 situation in March, the market started to price in a significantly higher likelihood for trigger breaches. Concurrent with the sell-off in equity markets and the fear of a renewed banking crisis, probabilities reached peaks of 0.16 for Deutsche, 0.08 for Credit Suisse and 0.07 for UBS. Or put differently, the market assumed still with probabilities of 84 percent or more that the banks would be able to maintain their CET1 ratios above the trigger levels within the next 12 months.

The trigger breach probabilities derived from more recent data reflect the expected positive impact of the large economic stimulus programs announced in the last days. According to the prices of AT1 bonds, the likelihood of a severe banking crisis could be reduced significantly by these programs. It will therefore remain important to monitor trigger breach probabilities over the next weeks and months to better understand the amount of stress prevailing in the banking system.

It is noteworthy that more senior instruments in the capital structure like TLAC-bonds (Total Loss Absorbing Capacity) have only shown moderate price reactions during the crisis. This demonstrates nicely that the multiple layers of capital instruments used by banks are an effective instrument to absorb stress and to protect the depositors and clients. Moreover, if AT1 instruments form part of compensation packages, senior management and key risk takers are provided appropriate incentives to maintain the stress resiliency of their banks.

* Probability of trigger breach per year, assuming that instruments are called by issuer at first call date. Risk premiums presumed to be similar as in CAT bond market and to have increased by 2% between February 20 and March 13